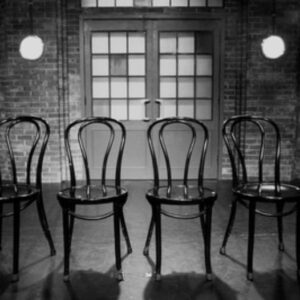 It’s the morning of April 19, 2011 when I receive the email. It’s from a friend who has an acquaintance in desperate need of an actress to step in to an original play due to open in ten days. They have fired the current actress and need someone—PRONTO.
“Here’s the phone number to call, if you’re interested,” the email reads.
I’m scared to make the call, but I’m intrigued because the play is written and directed by three former Second City guys, and I think it would be cool to work with them.
By afternoon, I finally work up the courage to phone.
I drive to the playwright’s Chicago home later that day where I’m met by him, his wife, and the director, Jeff Michalski. Jeff has me read a few lines and says, “Will you do it?”
“OK!”
I leave with the script and jump into rehearsals the next day.
I cram lines day and night, in between working and rehearsals. Oh, and did I mention it’s also a musical? Thank heavens I have a good memory.
The play is set in a Chicago piano bar where three regulars, a waitress, and the piano player interact.
Grace, the character I play, is an ex-beauty queen past her prime who was forced by her dysfunctional stage mother to compete in beauty pageants as a girl.
Grace is raped at the age of 15 by one of the judges and struggles the rest of her life with her own addictions and feelings of worthlessness. Some backstory!
As opening night approaches, there is one scene at the end of Act II that I’m terrified of bombing.
Grace goes to the bathroom where she takes a lot of pills (off stage), plus what she’s already had to drink, and has to come out and deliver a monologue under the influence–slurred speech, jerky body language, and f-bombs, to boot.
This scene terrifies me. I’ve never done anything like it—EVER. I know I’m going to make a complete fool of myself. At the dress rehearsal, Jeff Michalski seems unworried and gives me a look like—you’ll be fine.
Opening night arrives. I have my lines down, know my songs, and, finally, it’s time for the pill-popping scene. I re-enter, take center stage, and am just about to speak.
But before I tell you how that scene unfolds, fast forward with me to this past Dec. 30 when I’m reading an article in Vanity Fair about Stephen Colbert, the late-night host.
Colbert’s talking about how he and his whole show had to do a major pivot when Covid hit and how the deafening silence of now doing his late-night show from his home without an audience is not unlike the horrible quiet after bombing in front of an audience during his improv days.
Stephen says: “The very first note I ever got from my very first director at Second City, a guy named Jeff Michalski, was, ‘You have to learn to love the bomb.’”
Imagine my surprise when I see Jeff Michalski’s name, yep, my Jeff Michalski. I read on.
“What he meant,” Stephen continues, “was not like ‘Survive when a joke doesn’t go well,’ or, ‘Feel okay, you’ll get them next time if the scene you improvise didn’t go well.’ But actually breathe in and love the bomb, love the moment of failure, which is actually incredibly useful if you’re actually bombing.”
So what happens back on that stage at the end of Act II? Well, I bomb. I’m out of my acting league. I feel stupid.
But I also remember having these other fleeting thoughts as I looked out through the lights at the audience that night. I think about what I’ve accomplished—learning an entire play in nine days—how much fun I’ve had, and I have a burning desire to get better. In short, I was learning to love the bomb. Thank you, Jeff Michalski!
* * * * *
Daniel Coyle, the author of The Little Book of Talent, describes the benefits of failure this way. Wayne Gretzky, the greatest hockey player ever, during solitary drills, would intentionally fall down while he skated.
Coyle notes, “As skilled as he was, Gretzky was determined to improve—which means reaching, failing, and, yes, looking stupid.
“Feeling stupid is no fun. But being willing to be stupid—in other words, being willing to risk the emotional pain of making mistakes—is absolutely essential….mistakes are not really mistakes, they are the guideposts you use to get better.”
I hired Jeff Michalski several times after that play to direct me in my one-woman shows. With his direction, I discovered a whole new set of skills—especially to take more risks and to really commit to things outside my comfort zone. That was a wonderful by-product of that whole experience.
So if in 2021 you want to live a little more boldly, embrace the bomb. Breathe it in. Love that moment of failure.
By the way, when I recently asked my husband and my mom—who had seen the piano bar show—if they remembered how bad I was in that scene, they had no recollection. All they said was, “We thought you were wonderful.”
Hmm.