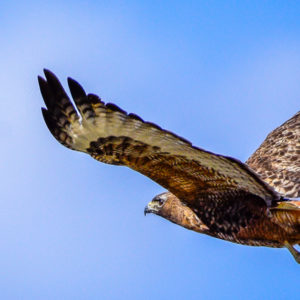 I look up! I spy a magnificent hawk.

It glides, then alights with wings outstretched on the top branch of a 75 foot green pine tree in the backyard of the house directly across the street from us.

One. Two. Three blurry heads bob from within.

Every day for three weeks, I pour my morning cup of coffee and squint through my cheap little binoculars trying to make out any movement within the nest.

Two huge parent hawks come and go throughout the day. They soar up or down in search of food, often majestically circling above. I utter the words, “Hawk, sail around. Hawk, sail around,” in memory of the pinchy bug game my mother used to play with me when I was a little girl, delightedly ending with “ I gotcha, gotcha, gotcha.”

On Mother’s Day, my husband gifts me a pair of REAL binoculars.

Oh, the majesty, the ecstasy of the thing, as my hawks come suddenly into focus, my three fledglings that aren’t so little after all.

For the next three weeks I obsess over them.

Through binoculars, I watch as they perch, nestle, then hop from branch to branch, and, finally, hop in place while flapping their wings.

On June 1, almost 7 weeks later, I watch one babe, now quite large, perch on the very top branch of the tree, determinedly flap its wings, and suddenly rise a foot above, momentarily elevated while still flapping. My own heart skips a beat, as if I have just seen a child take its first step.

I have grown a motherly attachment and fret for their safety. Will they make it? What kind of world will they be making their way in?

Last night my husband Bill and I once again watched the news of the country-wide protests in honor of George Floyd and so many other men and women of color who have been killed or who have had to try to make it in a world stacked against them.

Our college-aged daughter in school in Kalamazoo is marching. Our other daughter in Chicago is delivering food to her co-workers and friends whose neighborhoods have been adversely impacted by the looters.

Bill and I are inspired by those demanding radical change to a system of extreme inequality and unfair treatment. We are disturbed by agitators and opportunists who distract from the important issue at hand. We long for leadership that is empathic and willing to tackle the hard work of dismantling social, economic, and environmental systems that are discriminatory and harmful.

Tomorrow, what kind of world will we be making OUR way in?

Now is the time to look up!

Today, we can help shape and edit the stories of tomorrow, to craft a new normal in our businesses, communities, families, and world—not a return to the stories of old. We can, with bold strokes of our pens, powerful words of our voices, and strong use of our legs, rewrite the stories we tell ourselves and others, stories that align with a vision for a world truly focused on the belief that “we’re all in this together.”

This morning, my hawks are gone, the nest empty. As quickly as it had begun my vigil has ended.

Then I see movement, and I look up. There, one of my babes is soaring through the backyards across the street, wings outstretched. Then I catch sight of the second one, perched on a branch in a large tree not too far from their nest, and then I spy the third not too far from its sibling.

I know now that there will never be another morning that I don’t look up, just on the chance that I might catch a glimpse of my little quarantine pals.

I also know that this indelible moment in time demands that we all must look up every day, squarely face the inequities in front of us,  and help create a new story for our world.