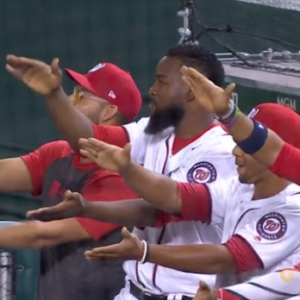 Just two days ago, Sunday, April 19, the Chicago Cubs should have been in D.C. playing their 20th game of the 2020 season against the 2019 World Series Champs—The Washington Nationals. But, alas, the pandemic has put baseball, and all of sports, on hold. So what do we root for now?

Well…last summer, I was sitting in the stands at Washington Nationals baseball park on the evening of July 23 hoping for one thing.

I was in D.C. on business, and my sister, a D.C. transplant and fifteen-year Nationals season ticket holder and over-the-top fan, had tickets that night.

I love my hometown Cubbies, but even I had caught Nats fever and had donned one of my sister’s many red curly W Nationals baseball shirts because of the “Baby Shark,” a.k.a. Gerardo Parra, a relief outfielder for the Nats whose fielding, clutch hitting, and infectious walk-up song—“Baby Shark”—had lit the Nationals on fire, not to mention all of baseball.

That night when Parra’s name was finally announced over the loudspeaker in the bottom of the seventh, I jumped to my feet along with twenty-two thousand other fans and started doing the “Baby Shark” chomp while singing: “Baby shark, doo doo doo doo doo doo.”

I’m not even that big of a baseball fan, but that July night I sat up straight in my club-level seat right along third base as Parra stood poised over home plate, bat cocked, awaiting his first pitch.

I was rooting for Parra to get a hit—big time.  And it wasn’t just me. There was a collective rush of adrenaline that coursed through the entire crowd. It was pride and excitement and hope for this kind of underdog player whose walk-up song choice “Baby Shark”–his two-year-old daughter’s favorite jam–happened to coincide with a turning point for the Nationals.

But it wasn’t just Parra’s performance and catchy song that enthralled people; it was also things like the dugout dances he led after teammates hit a homer and the little stuffed baby shark toy he hung from a railing in the Nationals’ dugout.

Parra quickly became a team favorite and a national sensation—helping to take the team from the second worst team in the National League at the end of May to winning the World Series in October.

Parra and the Nationals gave their fans something to root for. It’s a great story!

So what do we root for now?

If you lead a team, own or run a business, are part of a non-profit, or belong to an organization, take a page out of baseball’s playbook and give your people a story worth rooting for.

Tell a story of someone who’s done something really cool or shown some act of kindness. Tell an organizational story that highlights challenges you’ve overcome or that demonstrates what you value in this crisis—in short, “Baby Shark” stories that give people something to cheer about and that fulfill a critical element needed right now—the human connection.

And remember, when this is all over, keep looking for and telling your “Baby Shark” stories. Those stories are always there, in good times and in bad.

And what happened on that lovely night of July 23rd? Gerardo Parra got a two-RBI single that brought us all to our feet again, chomping and singing at the top of our lungs.