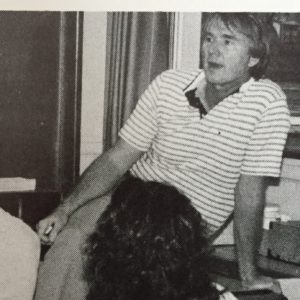 After a loud outburst from my husband, I knew the Bears’ playoff game was over.  Bill emerged  from the basement in a combined state of shock and awe. The play-by-play of the final moment—when the Bears were down by one point and Cody Parkey hit the goal post resulting in a devastating loss and end of the Bears’ season—tumbled from his mouth.  “But it was a great game,” he said.  “The whole season has been unbelievable!!!”

The next morning, still reeling, Bill headed off to York H. S., stood in front of his first period class—Freshman band, and did something that he doesn’t normally do.  He set aside the curriculum for a moment and shared a story.

He told them how he had become a Bears fan back in college when he moved here from Denver and of his 35-year loyalty to a team that didn’t often win. But then this season, the new coach, Nagy, brought a different kind of energy and vision. After a win, Nagy held a team dance party in the locker room at Soldier field, with mood lighting and a disco ball. Bill told of an innovative general manager who thought outside the box and sought out players like Tarik Cohen, the hard-working 5’ 6” running back whose speed is due, in part, to learning to outrun the pit bulls that roamed his neighborhood in rural North Carolina where he grew up. And then Parkey himself, the kicker, who demonstrated in front of millions poise and humility in response to one of the worst moments of his career.  “This season,” Bill went on, “is a great example of what it means to work together toward a common goal, with its ups and downs, and to enjoy the journey no matter the outcome!”

Will Bill’s story have any impact on these students?  Maybe.  Maybe not. But let me tell you another little story.  Two weeks ago, our daughter Kaitlin, who has decided she wants to be a psychiatrist, started shadowing a doctor, Sanjay. At their first meeting, they discovered they were both from Elmhurst and had attended York H.S.  Sanjay is older, but he asked Kaitlin about the teachers she had.  Then Kaitlin said, “My grandfather used to teach English there.  Maybe you had him.  Mr. Cloud?” Sanjay stared back in disbelief. “You’re Mr. Cloud’s granddaughter? He’s one of the reasons I became a doctor.  He really inspired me. I still remember one of the poems he had us memorize—“The Windhover.” And one day, Mr. Cloud said to me, ‘Sanjay, when are you going to start being the leader you’re meant to be?’ Something clicked then. And I often thought about that during the hard days of medical school, and I often thought about that poem.  I can still recite it.”

We often don’t know the impact our stories and words will have. We feel the pressure to get down to business, to tick items off the agenda, to be “professional.” But if we don’t share our stories, if we always opt for expediency over content, we might miss an opportunity to impact someone in a far more compelling and life-altering way.