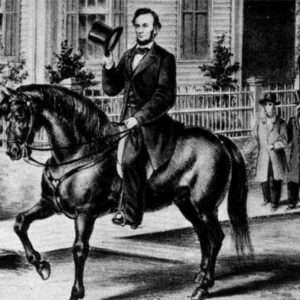 Up until a year ago, I used to drive a little Honda Civic.  It was a pretty economical car with cloth seats and basic amenities. I would bring my big dog Sylvie in that car a lot too, so I’m sure it smelled like—well, dog.

All of that was fine until I would show up for a speaking engagement at a country club or fancy shmancy place and have to use valet parking.  Drat, I thought.  Why didn’t I vacuum out my car before I came—get rid of some of the dog hair—or at least spray some Febreze.

But it was too late.

I’d pull up alongside the shiny BMW’s and Range Rovers, feeling a little self-conscious, and promise myself to tip the valet generously to make up for Smelly Dog.

And as the valet held open my door, I had that niggling feeling that somehow my car defined me, that there was a tiny part of me that didn’t fit in here.

This feeling came flooding back to me recently as I was reading Doris Kearns Goodwin’s book Leadership in Turbulent Times.  There’s this wonderful passage in there about Lincoln arriving at his first debate against Stephen Douglas in the fall of 1854.

On the night before the debate, Lincoln arrives in Peoria sometime after midnight, alone and on horseback, wearing his ill-fitting suit—high-water pants and arms that stuck out from too-short sleeves. In contrast, the impeccably dressed Stephen Douglas had arrived much earlier in the day at the head of a huge parade, in a carriage drawn by four  white horses and preceded by a band of music.

But here’s the thing.

All that pomp and circumstance was, ultimately, no match for Lincoln who cared nothing for appearances and everything for people, ideas, and keeping it real.  Lincoln was a man who once walked six miles to borrow a grammar book.

A man who was patient, tenderhearted, generous, kind, and helpful. And when Lincoln spoke, it was like he was having a conversation with friends. He set himself apart by illustrating his arguments with stories, stories based on observations made from everyday people.  Sometimes his language and gestures were awkward, but few who heard him speak ever forgot the point of the story or Lincoln himself.

I no longer drive my little Honda Civic. A year ago, I inherited a brand new Toyota Camry from a relative.  It has leather seats, a sunroof, and lots of shiny knobs.  It feels kind of ooh-la-la.

But nice car or not, I’m still the exact same person who drives around Smelly Dog. The truth is that we get to choose to proudly reveal our authentic selves or allow ourselves to be influenced by the expectations of others and the world around us. I hope I will always remember to choose the former.