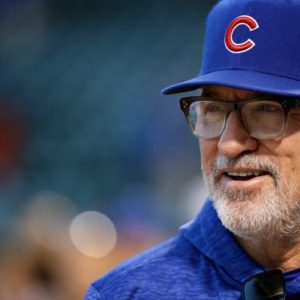 You might think it happened the night of Nov. 2, 2016 watching one of the most exciting World Series games ever—Game 7: Cubs vs Cleveland Indians.  I was this close to calling it a night during the rain delay.  Thank heavens I waited out those 17 minutes to witness one of the most memorable games in baseball history, that is if you’re a Cubs fan.  You might think that’s the day Joe Maddon captured my heart.  But you would be wrong.

It actually happened the day I found out that Joe loved to read. Whaat? Yep, I read a story about how when Joe was in the minors, he was never without a book—on long bus trips, in his hotel rooms.  He also carried a dictionary with him everywhere.  When he was a kid, his Uncle chuck gave him James Michener’s Centennial and said, “Read this book.” Joe couldn’t put it down.  He had another uncle who challenged him on everything.  If Joe used a word incorrectly, his uncle would correct him.  Joe said, “Uncle Rick taught me that when you’re talking about the second-best thing in a subject, not the best thing, the word to use is penultimate.  So in 2016, the penultimate team was that great Cleveland Indians team.” LOL

And then when I learned that Maddon had chosen his 2018 slogan “Putting Art Back In The Game” because he had been inspired after reading the book Leonardo DaVinci by Walter Isaacson—one of MY favorite books—well, I was smitten.

Joe loved that DaVinci was relentlessly curious about everything, that he studied science, anatomy, architecture, sculpture and more!  DaVinci pulled the skin off of cadaver’s faces to study the musculature right around the mouth.  (And we all know how that little experiment worked out: Mona Lisa!)

Maddon believes: “It’s liberal arts, man.  That’s why I went to Lafayette for a liberal arts education.  The more well-rounded you are, the better.  I want the Cubs to be a liberal arts baseball team, one that’s good at running the bases, fundamentals, defense, all the things that make you complete.”  And this year, Joe wants his players to think of themselves as artists, to feel and see the artistry in the game of baseball.  He told the press, “I’m all about the numbers and information, but let’s not forget the human being, let’s not forget the heartbeat.”

You can see why he captured my heart, right? But how did he get my money?

Well, I was so intrigued by that story that I found my way to his website and discovered Joe’s philanthropy: Respect 90.  The name comes from the fact that Joe doesn’t make many demands of his players, but there is one: all players must run hard to first base.  He says, “I ask our players to run hard for 90 feet—to respect that distance and the respect will come back to you.”

This idea started on plane ride sometime in the 1990’s.  Joe had just been passed over to join the staff of the Angels, and he was upset.  Instead he was headed to Texas where he was to be a roving hitting instructor.  “He wasn’t happy, and to make matters worse, he got stuck in the middle seat on the plane ride there, and the woman next to him was a talker, which he didn’t want to do either.  But somewhere during the course of the conversation she says to him, ‘Whatever you put out there will come back to you.’ And Joe got off that plane that day with an entirely different outlook.”

And that’s what Respect 90 is about, that whatever you put out there will come back to you.  If you give respect, you’ll get respect in return.  “That,” Joe says, “is the only message I want to get out of that.”

And so that’s how Joe opened not only my heart but also my wallet.  I bought all kinds of stuff !

That’s the power of a story.  And that’s what you can do with your organization’s mission statement. Turn it into a story that will inspire people to take action.