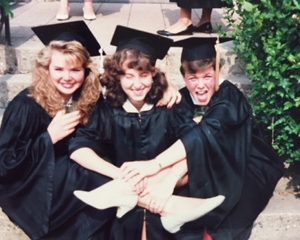 That’s a snapshot of the day I graduated from U of I—May, 1986. My roommates and I didn’t actually attend our graduation ceremony.  We rented the robes and hats and orange and blue tassels (Go Illini!), but we had our own ceremony right in the living room of the large first-floor house we rented in Champaign-Urbana on Wright Street.  We told our parents not to come because the commencement ceremonies “were just too big and impersonal.” Instead, we each wrote something to read, like a poem or limerick or other memories we wanted to share.  On graduation day, we donned our robes, paraded around the house, our heels clomping across the worn-wood floor, then stood in a circle and shared our tributes, amidst tears and bursts of laughter, of course.  It didn’t help that we had been drinking mimosas from the moment we woke up, so we were all inebriated by 9 AM, and all of our eyes have that squinty drunk look to them in all the pictures.

I can still feel the joy of that day in my bones.

Snapshots.  It’s fun to unearth the stories behind pictures.  I bring this up because sharing a photo and a story can be a great bonding experience—especially at work.  “No way,” you say.  “There’s no time for that.”  But here’s why we need to make time. Too often in the workplace we tend to favor expediency over getting to know one another.  And this can be a problem.  Vivek Murthy, former Surgeon General, notes in a recent powerful article in Harvard Business Review that loneliness is a growing health epidemic. A shocking 40% of Americans report feeling lonely.  And this is having an impact not just on our health but also on business.  He writes:  “Researchers for Gallup found that having strong social connections at work makes employees more likely to be engaged with their jobs and produce higher quality work, and less likely to fall sick or be injured.”

Knowing that people bring the most to their work when they feel connected to the mission and people around them, Murthy and his team developed “Inside Scoop,” an exercise in which team members were asked to share something about themselves through pictures for five minutes during weekly staff meetings.  The impact was immediate.  Murthy says that these sessions became people’s favorite time of the week and were more enthusiastic about participating at staff meetings.  People felt more valued and even team members who tended to be quiet started contributing more.  And most of all, everyone told him how much more connected they felt to their colleagues and the mission they served.  All because of a picture and a story.  Now that’s powerful!

Here’s to your snapshots and stories (AND mimosas)!