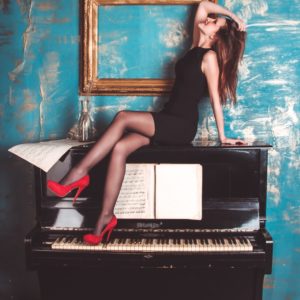 Have you ever had that naked dream? You know, for some reason you’re suddenly in the middle of a store and you’re stark naked and you’re desperately trying to hide? Well, that’s how I felt one night in the summer of 1987, only, it wasn’t a dream.

I was in grad school and had landed a piano bar job on the weekends at the Holidome in Skokie. No doubt some of you remember that place on Touhy. Now one of the things you need to know about me is that I. LOVE. SHOW TUNES!!! So naturally, that’s what I played and sang. And it was perfect for the Holidome crowd. Occasionally, I’d throw in a little Barbra, but, mostly, it was show tunes.

When my graduate classes ceased for the summer, I managed to land another piano bar gig near my parents’ little summer home in Harbert, MI. It was an upscale restaurant on Red Arrow Highway with a large separate bar area that had live music. I had stopped by the bar one day and asked the manager if he were looking for musicians. “Yes,” he said. I told him I sang and played piano, and he hired me. Easy peasy.

I was scheduled to play two weeknights, Wednesday and Thursday, perfect with my Holidome gig. So the next week, I drove to our MI house, primped for my gig (80’s shoulder pads and big hair) and headed toward the restaurant armed with my Sondheims, Rodgers and Hammersteins, and Marvin Hamlisches. As I drove up to the restaurant, suddenly, I hit the brakes when I saw the three little words that lit up their billboard: Live Jazz Tonight! I gulped. Surely, there had been some mistake.

The bar was abuzz with people already enjoying themselves as I made my way to the piano. “Please,” I thought, “let me somehow get through this night.” I plopped my music on the piano, positioned my hands above the keys, and went into my rendition of the only jazzy thing I knew: Barbra Streisand’s version of “New York State of Mind.” And then I started in on my show tunes. It wasn’t long before one of the patrons sidled up to me and said, “Hey, about playing ‘How High the Moon’”?

I shrugged my shoulders and shook my head no. I was in hostile territory. No thespians here.

He kind of smirked as he turned and walked away saying, “I thought there was supposed to be live jazz tonight!”

I glanced at my watch. Twenty minutes down. Two hours and forty minutes to go.

It wasn’t long before someone else requested a jazz tune. And then another. And another. People were looking at me and talking about me–at least that’s what it felt like. There was no place to hide. I was utterly exposed!

At the end of the nightmarish three hours, I was so relieved to be leaving that I barely stopped to hear the manager say, “I think it would be best if you didn’t come back tomorrow.” Ya, think? As if I would ever step foot in this place again.

I hopped in my car. I don’t even remember if I cried or not. It was total humiliation.

As my show tunes and I drove back to Chicago, amazingly, hope surged back, and I was determined to learn new repertoire. So the next weekend after my gig at the Holidome, I planned to drive over to a hotel near O’Hare where I had heard they had a REAL piano bar player. But on my way there, I started to chicken out thinking, “Oh, just forget it and go on home.” At the last minute, I took the ramp to the hotel.

I heard her playing as I walked in, and she was the real deal. Her name was Lisa, and when she took a break between sets, I introduced myself. We hit if off, talking and laughing. And before I left that night, imbued with a new purpose and new songs to learn, Lisa invited me to a friend’s party the next weekend–a guy friend of hers.

The party was after work, and, again, I almost didn’t go. I wouldn’t know anybody there but Lisa, and I didn’t really know her. I went to that party, and “that guy” turned out to be the man I would marry. The man I’d still be married to 27 wonderful years and three incredible children later.

Now some might call it serendipity. But I would argue that our lives are made up of individual and EXTRA steps, big and small, forwards AND backwards, and those steps–seemingly insignificant, scary, impossible, and, yes, nightmarish at times–are what create opportunity and meaning in our lives. Who knows where the next “ramp” might lead, if you’re willing to take that extra step?

That bar is still there on Red Arrow Highway. And that billboard is still there too. My husband and I have driven by it for the past 27 years, heading to or from my family’s summer place. And each time we pass it, we smile at each other and wonder if there’s “Live Jazz Tonight.”